Managing many Clients with several projects where multiple team members are working them, across an Agency that has a different product offerings can be a challenge. Finding tools and processes to sort it out and ensure everything gets done, is on time, and on budget can be really hard, especially for a small Agency whose trying to keep costs down. The productivity tool market is flooded with options, and finding a good one is tough - but when you do, you want to share. Here’s a quick story on what we’re currently trying to tame the todo list. I hope you find it useful!

I’ve been working in the IT and Software industry for a long time, a really long time. I’ve worked mostly as a Business Analyst and Project Manager and more recently as a Scrum Master and now Program Manager, here at Rietta. During this time I’ve worked mostly at companies who were creating software as a service, or who had other services and used software to support those services. Rietta is the first time I’ve worked at an Agency and coming in, I’ve had the task of trying to figure out how to plan, organize, and manage a group of disparate developers working on more projects than there are people at the company.

Examples of our work include: maintenance, backend development, creating features in existing products, redesigning the front end for an existing product, building webpages, security audits, refacing an entire web site and more. In other words, lots of projects, lots of different types of work, and no good way to keep up with all of it.

I started out using a modified Bullet Journaling method, just to be able to capture everything that was coming in, going out, who was working on what, and what needed to be done. This was working okay, but really wasn’t ideal, mostly due to the concept of “migration” in that system. This meant I was copying a lot of information from day to day because it wasn’t getting done in a single day. The other challenge was that there is more than one idea of “done” - there is the code is done - or written, but then it needs code review, rework, more review, coordinating with the client for deployment, and on and on.

Standard tools like JIRA aren’t a good fit for us, because there are too many projects, and the idea of running that many backlogs would be a nightmare. Trello and similar types of tools would be fine, but they aren’t as good at capturing the types of detail I wanted to maintain and facilitate communication in the way I like. Maybe I’m picky, maybe I’m not the only one with this problem.

Simultaneous to all of this, I’ve been working with my team on overall productivity improvement at the individual level. I’ve been coaching, recommending readings, and videos, and suggesting that they try the Bujo method too. But you know how these code heads are, they want it all on the computer! They want to type, not write. Writing is for cavemen or cavewomen, cavepersons?

A few weeks ago one of my developers, Alex, came to me with a new tool he’s been trying that’s really helped him start to better manage his time - a pretty popular to do list maker type thing called Todoist. It’s not revolutionary, but it’s good. It’s solid. It does pretty much most of the things he needs it to do and it’s really increasing his productivity and his focus. He’s getting more done every day. That’s a good thing! Then he turns the next guy on to it, Chris, who also agrees that it’s really helping him take control of his lists, his time, his focus. After learning they both paid for premium within 24 hours of making an account on this platform, I became intrigued and I agree to give it a try. 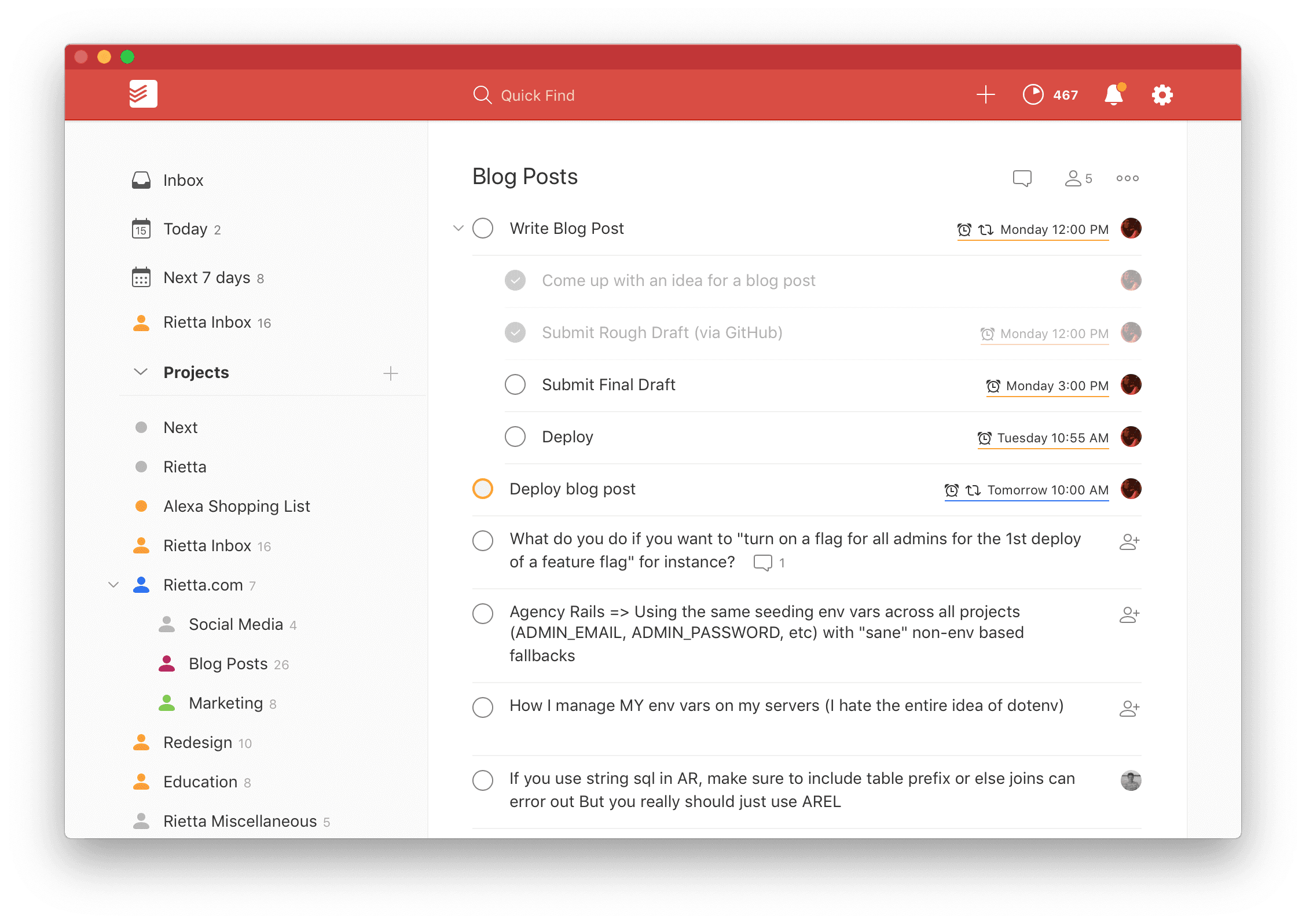 Lo and behold just a few weeks later, I can’t remember where I put my BuJo, and because I can create a project, share it with the other team members, and we can collaborate, reassign, comment, and move things around, I can see what everyone is doing, I can assign work and tell when it’s been done, and I can brain dump all those little annoying things that give me and everyone else cognitive overload into it, in mere seconds, I too am getting more done. I’ve convinced (or cajoled?) the remaining team members into using it and I couldn’t be happier.

Is it going to solve all the world’s problems, or even work for every newly minted Program Manager in an Agency full of cats that need herding? Maybe not. But for me, it’s scratched the itch and it’s giving me room to focus on more important things like Marketing and Sales and Administration and (checks her Todoist list) writing blog articles.

One other thing of note, we looked at using the individual version both free and Premium as well as the Business version that lets you have a team of people in one “instance”. The Business version doesn’t feel quite ready for prime time right now and has no more controls or capabilities than the personal Premium version does when you just share projects. I hope that they will continue to evolve it and we’ll keep an eye on that and similar tools to help us better manage our small but growing agency.

Tell us what tools you like by tweeting @riettainc. We’d love to hear what you are using and what you think about Todoist if you use it too!

Rietta secures web applications, existing and those that need to be built.